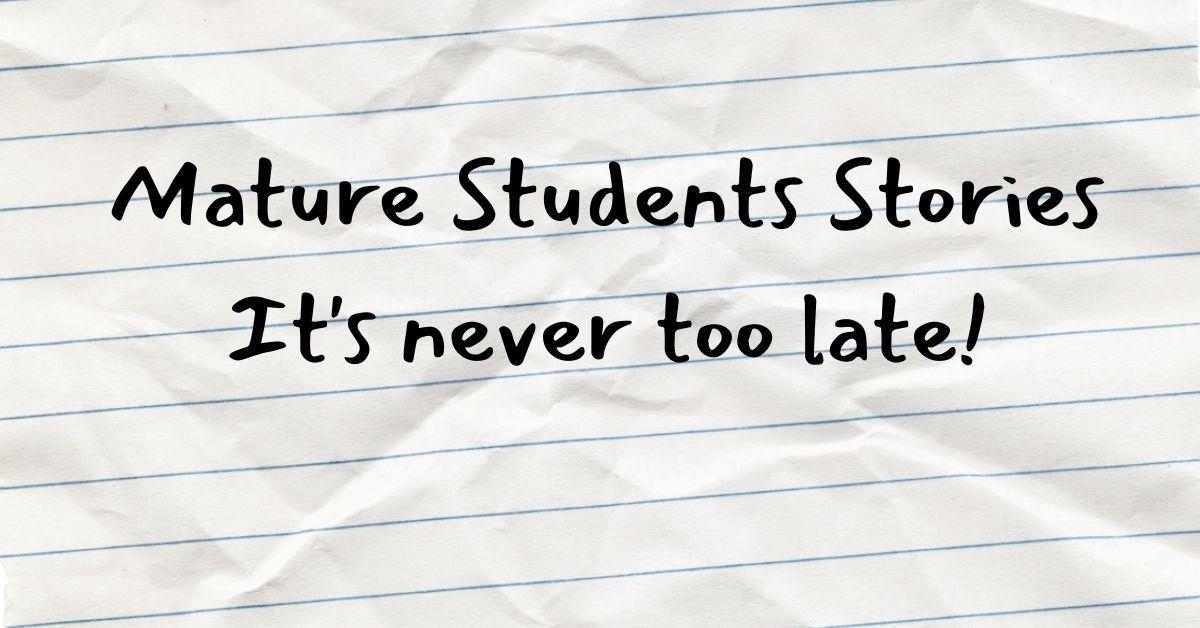 In this post you will find all mature student stories published on the blog. When returning to education, or just thinking about it, most people are “assaulted” by a wave of doubts and fears.

Those tend to vary according to personal situations, but some are very recurring for all:

However, sharing mature student stories of people who have faced, or are facing those now, can really help those who are afraid to start university!

If you want to share your story, whether you just started as a mature student or already graduated, whether anonymously or publicly, please get in touch on Facebook or Reddit and we’ll publish it!

Below you will find various mature student stories from different ages; some doing distance learning, others studying at brick unis; some studying full-time, others part-time and so on.

You will also find a link to read stories in full for more details, enjoy!

Abbey started university at 24 as a young mum of two. She studied for a degree in Psychology with Counselling with the Open University.

Just like most mature students, she also initially thought it was too late to change her life as she had too many commitments.

However, after years of battling with mental health, she decided to take this step and study psychology.

Her goal was (and is) to become a counselling psychologist to help others with their struggles.

It wasn’t easy, particularly during the pandemic. During that time Abbey not only had a new-born to take care of, but she was also home-schooling her older daughter.

Despite all that, she achieved the highest graded dissertation in her tutor group, a stunning 98%, and finished her degree with a first class honours!

Abbey is now studying for a MA in counselling and psychotherapy practice to keep following her dream.

You can read the full Abbey’s mature student story here.

Mark started university at 30 as a mature student to study for a Supply Management Degree after working all his life.

When he was 18, he decided to start working rather than going to university. He ended up working in the supermarket industry, and was very happy with that.

Mark liked his job and managed to become assistant manager in few years. His goal was to grow in the industry and have a rewarding career.

However, he realised that without a degree his career progression goals were more “challenging”; and it would take a lot more time to get where he wanted.

He then decided to start university full time and switch to a part time job. His objective of a highly rewarding career in the industry did not change, so he decided to study supply management.

Mark found that his work experience helped him massively for his studies as he could see those concepts applied at his workplace.

In his last year of university, Mark secured a place in a graduate scheme for the company he was actually working for! His goal is to become an area manager and he is determined to achieve that!

You can read the full Mark’s mature student story here.

Donna graduated at 38 with a Degree in Forensic Science. She first went to university at 18, but due to unfortunate circumstances she dropped out in her first year.

However, she decided to go to university again after she was fired from the company she had been working for fourteen years.

Donna chose to pursue a Forensic Science degree as it combined two subjects she absolutely loved. During her studies she also worked as an assistant manager for Greggs.

Although she originally started university part time, Donna decided to switch to full time studying as she realised it was manageable.

At the beginning, Donna was scared she would be too different from the youngsters. However, she ended up making lots of friends and she never regretted going back to university.

Nevertheless, she describes her graduation day as the best day of her life!

You can read the full Donna’s mature student story here.

Stephanie started university at 25 to pursue a Marketing Degree. She was driven by the desire to change career completely, and leave her job as a waitress.

She could not see a future as a waitress, so she decided to go to university at 25. Her interest for big brands and advertising led het to study marketing.

Stephanie enjoyed university life as a mature student. Just like other students, she made friends, studied at the library, attended classes, tutorials and took part in other activities.

After graduating at the age of 28, Stephanie found a job in a marketing agency as a junior agent. Her life and career changed completely!

You can read the full Stephanie’s mature student story here.

Alexandra started her degree at 23 with the Open University. She decided to study Computing and IT to follow her main interest, programming.

Initially, Alexandra was hesitant to start a degree due to English not being her native language. However, she was looking to make a significant change in her life, so she decided to enrol.

Alexandra identified two main challenges while studying towards her degree with the Open University.

Firstly, time management since she has always been working full time while studying at the same time; secondly, self-doubt, something that Alexandra describes as the biggest issue in her life.

Everything changed when she was able to change job, from picking and packing goods in a warehouse to recruitment consultant.

Alexandra said that studying helped her get her new role. Her presentation skills improved a lot with her studies, and she was also more confident during interviews.

After she finishes her studies, Alexandra would like to become a software engineer.

You can read the full Alexandra’s mature student story here.

Bethany has decided to go to university at 27 to follow her passion, fashion. Unsurprisingly she has chosen to study for a Fashion Management Degree.

She was always passionate about the industry, particularly about luxury brands and shopping. So she started working in a clothing boutique at a young age.

As her aim was to achieve a high level career in the fashion industry, Bethany learned French fluently. This helped her get a job for a luxury clothing brand.

She became really good at her job and earned a good salary thanks to bonuses and commissions. Her ambition was to become a brand manager for that company, her dream career.

Bethany applied for that role twice, but despite her efforts and experience in the industry, she did not get the job as it required a degree.

It was at that point that she decided to return to education at 27. Her extroverted character meant she didn’t have any problem to fit in at university as a mature student.

After finishing her studies, Bethany would like to become a fashion brand manager.

This is the story of Hayley, a young mother who started her History degree at 29 with the Open University, and graduated at 32.

When she was in her 20s, Hayley did not have any particular interests nor ambitions for careers. She felt rather lost and unsure of what she wanted for her life.

A spine injury and a complicated relationship which destroyed her self-esteem and confidence, led her to a very poor mental health.

As she slowly recovered from all that, Hayley found the love of her life and soon became a mother. Supported by her husband, she decided to return to education at 29 to study for a History degree.

Despite few challenges, particularly during covid, Hayley excelled in her course and graduated at 32 with a first class honours degree in History.

Hayley has then decided to continue her studies by pursuing a masters degree.

Debbie decided to go to university at the age of 41 to pursue a Psychology Degree, an interest she always had.

When younger, Debbie was put off by the idea of sending more years in full time education. So she decided to study for a Legal Secretarial Diploma instead, and soon started working after that.

She then moved to the learning and development industry, where she had a rewarding career. However, it was her manager who encouraged her to return to education to fulfil her real career dream.

She didn’t think about it twice this time, and she started university at 41. Initially, Debbie was a bit nervous due to the age gap with other students.

Nevertheless, she later found that to be just psychological. Debbie also found a lot of support around academic writing, which she improved with great results.

Another challenge she faced as a mature student was balancing studying with family commitments. She had to develop time management and organisational skills to overcome that.

In the future, Debbie would like to complement her former learning & development career with her current psychology studies; so she is considering a few ideas related to that.

Thank you for having a read through the mature student stories published on the blog. If you liked any, please share it on your social media and help it reach more people, it can really help others!

“It is never too late to be what you might have been.” George Eliot

I’m an “ex mature student”, I started University at 26. Why? I felt stuck in a job I didn’t like and saw no future.

I graduated at 30 and my life has changed completely since then. It’s never too late!

I started this blog anonymously because I am super shy, but I want to help everyone who feels like I felt at that time… YOU CAN DO IT

As an Amazon Associate I earn from qualifying purchases.

© GoBackToEducation, 2022. Unauthorized use and/or duplication of this material without express and written permission from this site’s author and/or owner is strictly prohibited and may incur to legal actions. Logo designed by GiocIllustrations